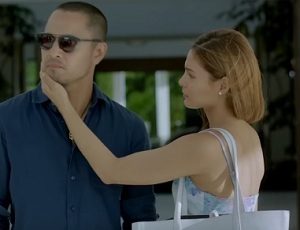 Lovi Poe and Derek Ramsay have teamed up and gone daring for their upcoming film “The Escort”, directed by Enzo Williams.
Regal Films has released the trailer for the sexy romantic drama, opening in cinemas soon, but it doesn’t reveal the story. Only some quotable lines, one of them being Poe’s reply to Ramsay that she takes orders, but she’s not on the menu.
The movie also stars Drama King Christopher De Leon, Rommel Padilla, and Jean Garcia.