2016 Movies: The Space Between Us (Trailer Songs) 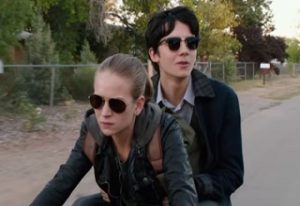 The Space Between Us is an upcoming American teen romantic sci-fi adventure drama film telling the story of the first human born on Mars travelling to Earth and falling in love with a street smart girl.
Written by Allan Loeb and directed by Peter Chelsom, the movie stars Asa Butterfield, Britt Robertson, Gary Oldman, and Carla Gugino and it is scheduled to be released on December 16.
The tracks used in the trailer are “Waves” by the American singer Kathryn Ostenberg and “Shine A Light” by the English musician Banners.

Light will lead the way, will set you free
I’m only looking for a little peace
And when the night falls
Oh call on me
Just don’t forget to show me some mercy
Ooh, say you’re mine
Ooh, take me higher