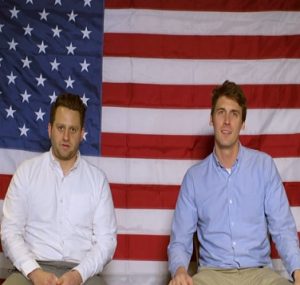 Politics brings people together in the upcoming comedy-mockumentary Undecided: The Movie, starring Jason Selvig and Davram Stiefler.
The two comediens, who are undecided voters, go on a six-month cross-country trip in an RV, visiting campaign rallies in order to find a presidential candidate worthy of their votes.
The film mixes real-life footage with scripted scenes and the trailer features some of the trolling scenes Selving and Stiefler did at the campaign’s rally of Donald Trump, Hillary Clinton and Marco Rubio. Hovever, throughout filming, no candidate out of the twelve was spared.