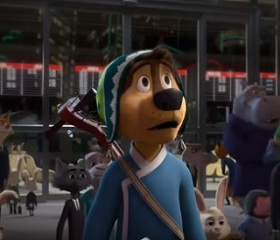 Rock Dog is an animation comedy centered around Bodi, a Tibetan Mastiff determined to pursue his dream of becoming a rock star against all odds. When a radio falls from the sky into his hands he decides to go to the city and do what it takes to be a musician.
Based on the Chinese graphic novel Tibetan Rock Dog by Zheng Jun, the film, scheduled to be released on February 24,2017, is directed by Ash Brannon and features the voices of Luke Wilson, Eddie Izzard, J.K. Simmons, Lewis Black, Kenan Thompson, Mae Whitman, Jorge Garcia, Matt Dillon, and Sam Elliott.
The track used in the trailer is “Glorious” by Adam Friedman.