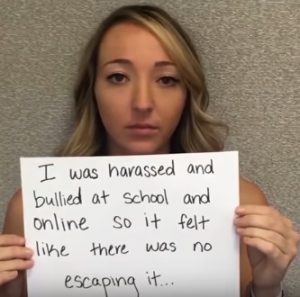 Netflix has released a new trailer for the original documentary Audrie & Daisy, titled #StopTheShame.
The documentary tells the story of Audrie Pott and Daisy Coleman, two American high-school students who have been sexually assaulted
when they were 15 and 14 years old respectively, and have subsequently become the target of cyberbullying.
The trailer #StopTheShame, aimed at highlighting that social media can be also be a source of support, not only a perfect mean for bullying and harassment, features Daisy Coleman and Delaney Henderson from the documentary, joined by other girls who have faced online bullying.
The track used in the trailer is “Flicker” by Tori Amos.