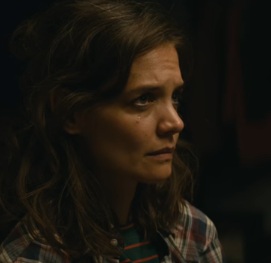 Katie Holmes is a single mother struggling to make a better life for her teenage daughter in the upcoming drama film All We Had, scheduled to hit theaters this winter.

The movie, which marks Holmes’s directorial debut, is set during the financial crisis in 2008 and explores the bond between the resilient mother and her daughter, while searching for stability.
The trailer features Stefania Owen, who plays the daughter’s role, saying to her mother’s boss, at the restaurant she used to work as a waitress: “Superheroes don’t fly or look like Jesus. They drive broken down cars. They take their kids with them no matter where they go or how bad things get. And sometimes, they make mistakes just like anyone else”.
The cast ensemble also includes Luke Wilson, Judy Greer, Richard Kind, Mark Consuelos, Eve Lindley and others.
All We Had premiered at this year’s Tribeca Film Festival and it will be released in the US theaters on December 9.

Tags: all we had moviekatie holmes