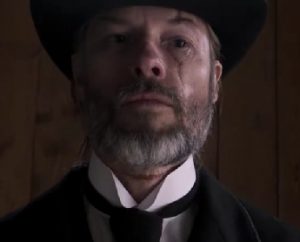 Dakota Fanning fights for her life in the western thriller Brimstone, after a new evil Dutch-immigrant preacher comes in the small rural community she lives in.

Written and directed by Martin Koolhoven, the film explores the relationship between the sadistic preacher and his step-daughter, whom he wants to marry. The cast includes also Guy Pearce as the Reverend, Kit Harington, who replaced Robert Pattinson, who’s got initially the role of an outlaw named Samuel, Emilia Jones, Jack Hollington, Carice van Houten, and Jack Roth.

Brimstone premiered at this year’s Venice Film Festival, where it competed for the Golden Lion.