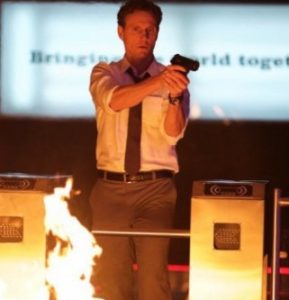 Kill three co-workers in the next 30 minutes, otherwise six of them will die – this is the “instruction” given to employees of the Belko Corporation, in the upcoming thriller The Belko Experiment.

The film, written by James Gunn and directed by Greg McLean, features how the employees of the respective company, based in South America, are trapped in their office building and forced to make though decisions and fight for their life. The cast includes John Gallagher Jr., Adria Arjona, Melonie Diaz, Tony Goldwyn, John C. McGinley, Stephen Blackehart, David Del Rio, Michael Rooker, Sean Gunn, Josh Brenner and others.

The Belko Experiment premiered at this year’s Toronto International Film Festival and is slated to hit US theaters on March 17, 2017.