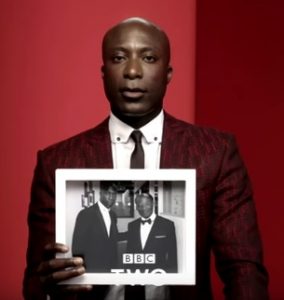 “I’m proud to be black” – says Naomi Campbell in the 20-second trailer released by BBC for the upcoming TV series Black is the New Black,
scheduled to premiere on November 9th, on BBC Two.
The new show, which will air on Wednesdays, at 10pm, features talented black Britons from politics, business, sport, culture, religion and science
describing what is like to be Black and British today. The cast includes Sir Trevor McDonald, Baroness Scotland, Thandie Newton, writer Gary Younge, musicians Jazzie B of Soul II Soul, Sir Lenny Henry, Dizzie Rascal and others, who talk about how they got where they are,
about their immigrant parents, and other experiences.