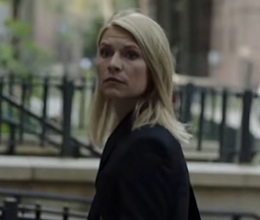 Homeland returns to Showtime with its sixth season on Sunday, January 15, 2017, picking up several months after Carrie Mathison thwarted a terrorist attack in Berlin.
The American political thriller TV series follows her as she is back in New York and works for a foundation that provides aid to Muslims living in the U.S. The new season takes place between the presidential election day and the inauguration, and tackles with issues like transfer of power and different competing interests.
Based on Gideon Raff’s original Israeli series Prisoners of War, Homeland, currently in production by Fox 21 Television Studios in New York, stars Claire Danes, Rupert Friend, F. Murray Abraham, Elizabeth Marvel, Mandy Patinkin, and others.
The track used in the trailer is a cover of by Tamer of the single “In The Air Tonight”, originally performed by Phil Collins.