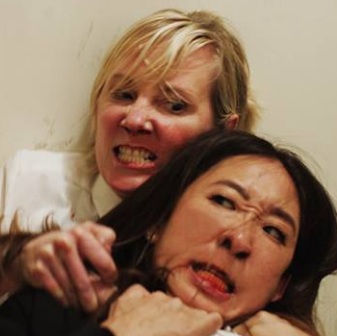 Sandra Oh & Anne Hesche are two former college students whose rivalry goes to extreme in the upcoming comedy-drama Catfight. And one thing is sure: the two actresses, whose characters belong to different social classes (you’ll see in the trailer), fight a lot. Jogs, punches, foot kicks, scuffles – there will be plenty of them and the trailer shows plenty, as well.

At first, Oh’s character, Veronica, is the wife of a rich man, and Hesche’s character , Ashley, is a lesbian waitress. After a chance encounter at the birthday party of Veronica’s husband, where Ashley serves the guests, the two get into a fight which ends with a 2-year coma for Veronica. When she wakes up, she learns that now she’s broke and alone, on the other hand, Ashley, the one who brought her into this state, is a successful artist, about to
have a kid with her partner. Set out to get revenge, she starts a war and a lifetime obsession for Ashley to destroy her. How will this end for the two? We will find out starting March 3, when the film will hit theaters.

The song used in the trailer says “Life is short, realize you do not live twice”.