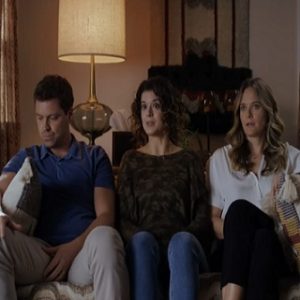 You Me Her returns on Valentine’s Day with new challenges for Izzi, Jack and Emma. Audience Network has released the trailer for the second season of the poly-romantic comedy series, following a suburban married couple and neophyte escort, forming a three-way relationship.

The new 10 episodes of the TV show created by John Scott Shepherd will show the complex realities of “throupling”, more exactly “what happens when they go home”, highlighting that, even though letting go seems easier sometimes, holding on is the answer. With Greg Poehler, Rachel Blanchard, Priscilla Faia in the leading roles, the series stars also Jennifer Spence, Jarod Joseph, Laine MacNeil, Patrick Gilmore, and others.

You Me Her, scheduled to air on Tuesdays, at 8.30pm, has been renewed also for a third season, on AT&T and DirecTV’s Audience network.

The song used in the trailer is the 2014 single “Kiss This” of the English rock band The Struts, from their debut studio album “Everybody Wants”.

Tags: audience networkyou me her