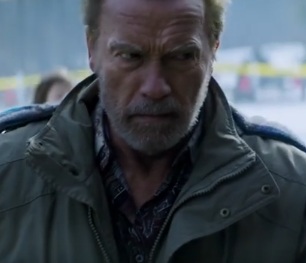 Arnold Schwarzenegger returns on this silver screen in Aftermath, a drama film inspired from the airline accident that occured in July 2002, and directed by Elliott Lester.

The American actor plays Roman, a man who loses both his wife and his daughter in a midair collision caused by an air  traffic controller and embarks on a quest to find the latter, who has started a brand new life in another city, and ask him to apologize for what he did. 487 days later he finds him and shows up at his door.

The trailer, featuring the song “Ain’t No Grave” by Hidden Citizens feat. Adam Christopher, reveals pretty much of
what happens in the movie, except the events occurring after he finds the air traffic controller. But if the movie is based on the true story of a Russian man who lost his family in the 2002 plane crash, then it’s easy for us to imagine the end. Aftermath does not have yet a release date set.