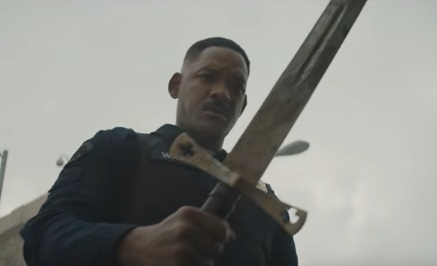 Netflix has released a teaser trailer for its upcoming original film Bright, starring Will Smith.

Set in an alternate present-day, where humans, orcs, elves and fairies have been co-existing since forever, the film follows two cops from different backgrounds, Ward (Will Smith) and Jakobi (Joel Edgerton), who encounter, during a routine patrol night, a dark force that changes the world as they know it.

Written by Max Landis and directed by Davis Ayer, Bright stars also Noomi Rapace, Edgar Ramirez, Lucy Fry, Margaret Cho, and Ike Barinholtz, and is scheduled to be launched exclusively on the streaming service, this December.

The teaser, launched with the message “Experience a new world”, features Will Smith holding a huge iron sword in his right hand, and saying, in another scene, to his partner, “I’m assuming this doesn’t end well”. The song playing in the background is “This Land Is Your Land” (one of the United States’ most famous folk songs) by American folk singer Woody Guthrie, who wrote the lyrics in 1940, based on the Carter Family tune called “When the World’s on Fire”, in critical response to Irving Berlin’s “God Bless America”.