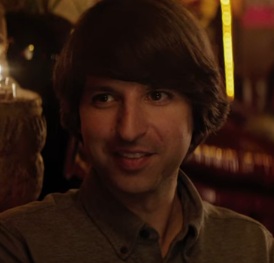 From stand up comedian Demetri Martin comes, this summer, on June 2, the comedy drama film Dean, a story about loss, grief and the redemptive power of love.

The film, illustrating the idea that sometimes it takes losing someone to find yourself, revolves around Dean, a New York-based illustrator who falls in love with Nicky, a beautiful young woman from LA, while trying to convince his father not to sell his childhood home after his mother’s death.

The cast ensemble includes Demetri Martin in the leading role, who wrote the script and made his directorial debut
with this film, Gilian Jacobs, Kevin Kline, Reid Scott, Mary Steenburg, and others.

The trailer reveals quite much of the film: the way Dean tries to determine his father change his mind about selling the house he’s grown up in, his father finding clients willing to pay the full price for the house, Dean meeting Nicky at a party where he makes a fool of himself and falling in love with her, and Dean’s father falling in love with the real-estate agent that helps him sale the house.

The songs used in the trailer are “It’s What You’ve Got” by Pete Dello and “In The End Is My Beginning” by Honeybus.