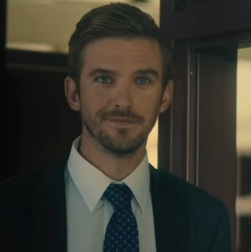 Dan Stevens is a blind man who regains his vision in the upcoming drama film The Ticket.

Written and directed by Ido Fluk, the film revolves around young man James, who, after overcoming his sight-deficiency, begins changing his life. The trailer reveals that his new ambitions, a nicer home, a better job, luxury car and tailored suits, impact on the relationships with his wife and his best friend.

He makes decisions regarding their young boy without consulting his wife, he lusts for a co-worker and cheats on his wife, and becomes estranged from his once close friend.

The cast ensemble includes also Malin Akerman, Kerry Bishé, Oliver Platt, and others.
The film is scheduled to be released in theaters and on demand on April 7.