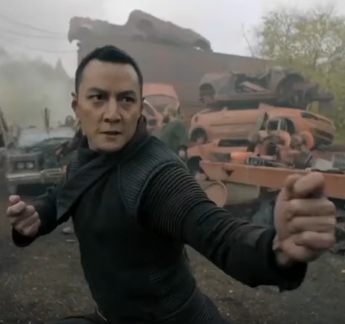 Into The Badlands – Season 2

Into The Badlands returns this spring on AMC with its second season. The TV series created by Alfred Gough and Miles Millar, blending elements of drama, action, adventure and martial arts, revolves around a warrior, Sunny, a regent (Head Clipper) to the Badlands’ most powerful Baron, Quinn, and a young boy who travel together through a dangerous feudal land, seeking enlightenment.

AMC has released a series of teasers, revealing some of the challenges Sunny will have to deal with in the upcoming new 10-episode season. Thus, viewers have the chance to see him getting ready for a fight, to see how The Widow is preparing for the fight of her life. “Fight for justice. Fight for redemption. Fight for family” – this is the tagline of the official trailer launched for the epic series, starring Daniel Wu, Orla Brady, Sarah Bolger, Oliver Stark, Aramis Knight, Ally Ioannides and others.

The second season of Into The Badlands will premiere on Sunday, March 19, at 10/9c on AMC.