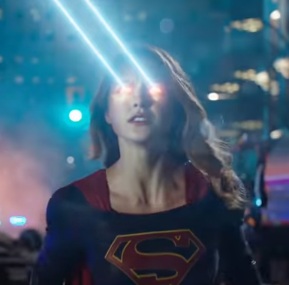 The CW has released a promo for the 13th episode of season two of Supergirl, titled “Mr. & Mrs Mxyzptlk”.

The hit series that moved from ABC to The CW after the first season, based on the DC character Kara Zor-El (Superman’s cousin), follows Supergirl as she finally decides, after 12 years of keeping her powers a secret on Earth, to embrace her superhuman abilities and be the hero she was always meant to be, protecting the National City from sinister threats.

The trailer features the fifth dimensional imp named Mr. Mxyzptlk, played by Peter Gadiot, making his appearance for “the weirdest Valentines ever”. He expresses his love for Kara, gives her an engagement ring and puts a wedding dress on her, making her ask him if he’s crazy. And there’s more to that: he dresses like Superman in an attempt to get Kara’s attention.

Kara Zor-El’s adventures continue on The CW, every Monday, from 8/7c.