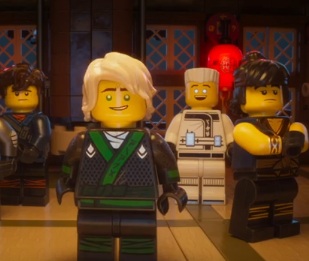 Warner Bros. Pictures has released a trailer tease for The Lego Ninjago Movie, scheduled to be released this fall, on September 22.

The upcoming animation action comedy film follows six young ninjas (Jay, Lloyd, Zane, Cole, Kai and Nya), who are ordinary teens by day and gifted warriors by night, as they carry out the task they’ve been assigned with – to defend their island home, called Ninjago – which implies fighting against monsters, dragons, armies of snake men and a warlord seeking for revenge.

Directed by Charlie Bean, this will be the second spin-off from the 2014 film The Lego Movie and will feature the voices of  Dave Franco, Kumail Nanjiani, Michael Peña, Zach Woods, Abbi Jacobson, Fred Armisen, Olivia Munn, Jackie Chan, and Justin Theroux.

The trailer, featuring Taylor Swift’s 2014 single “Bad Blood” (from her “1989” album), shows an old Sensei asking the six ninjas if they are ready to risk their lives to defend Ninjago and the ninjas giving different answers, from a determined “Yes” to hesitant “maybe”.