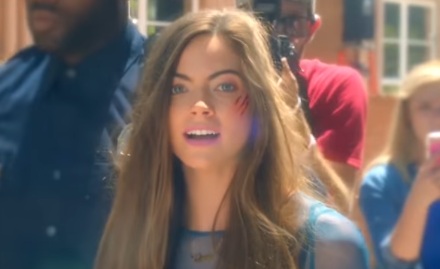 Infamous is an upcoming drama film, scheduled to be released following two high-school best friends whose friendship turns into rivalvry after one of them becomes more popular on social media.

The film follows Rachel Nelson and Rachel Richards, self designated queens of posh high school and known as “The Rachels”, who become social media rivals. When one of them is found dead, after a fatal fall from her high-rise apartment, the other, even though is suspected to have been involved in the “accident”, enjoys every second of the attention because she loves being popular. And, eventually, she becomes the most popular in school, with no one to steal her spotlight. However, things change for her when another student begins to investigate what really happened that night on the roof.

The cast ensemble includes Caitlin Carver, Madison Iseman, Daniela Bobadilla, Austin Cauldwell and others.
The trailer reveals pretty much everything that happens in the film, starting from their glorious time as “The Rachels”, the moment one of them says she doesn’t want to be part of “The Rachels” any more, their friendship turning into rivalry, the death of Rachel Nelson, who becomes more popular than the other, and, in the end, the truth about her death, revealed by Rachel Richards herself, so it is a sort of spoiler alert. If you want to be surprised, you’d better wait for the film to hit theaters. “Nobody ever remembers a victim, but everyone always remembers the villain”, says Rachel Richards as she exits the high-school with a scratch on her cheek, and her hands in cuffs.