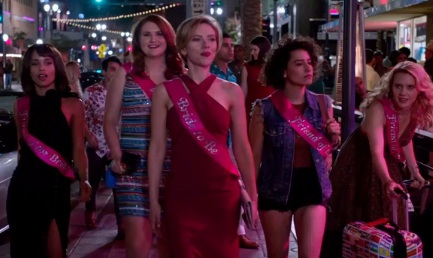 Scarlett Johansson returns to the silver screen, this summer, in the comedy Rough Night.

The film, written by Aniello and Paul W. Downs and directed by Lucia Aniello, follows Jess (Scarlet Johansson), a bride-to-be and her four friends from college, reuniting for her bachelorette party, at a beach house in Miami, and dealing with the death of a male stripper they hired. The cast includes Zoë Kravitz, Jillian Bell, Kate McKinnon, and Ilana Glazer as Jess’s friends, Paul W. Downs, Ty Burrell, Demi Moore, Colton Haynes, Enrique Murciano and Karan Soni.

The red band trailer released for the film features Scarlett’s character going on a weekend trip with her friends, partying like crazy (with plenty of alcohol and drugs) and, when their fun night with the stripper ends in tragedy, with the latter’s accidental death, trying to get out of the “critical” situation. The film, promising lots of funny scenes and a twist, is set to be released on June 16.

The songs used in the red band trailer are “Light It Up (Remix)” by Major Lazer feat. NYLA & Fuse ODG and “Double Bubble Trouble” by recording artist M.I.A., from her fourth studio album, “Matangi”, released in 2013.

The songs used in the international trailer are “Lookin At You” by SpeakerHedz and “A Little Party Never Killed Nobody” by Fergie ft. Q-Tip, GoonRock.