2017 Movies: The Most Hated Woman in America 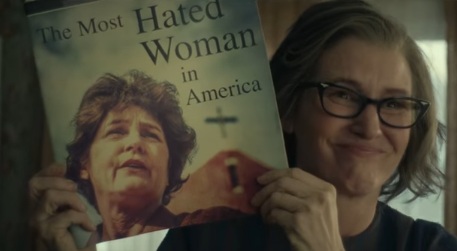 Netflix has released the trailer for its upcoming original film The Most Hated Woman in America, from the director of An American Crime, Tommy O’Haver.

The film tells the true story of Madalyn Murray O’Hair, who was known as the head atheist activist of America, leading the organization American Atheist, which she founded, for 23 years, and becoming the most hated woman in the country.

“In greed we trust” is the message conveyed in the trailer, featuring Academy Award-winner Melissa Leo as Madalyn Murray, saying, at the end, “Nobody can hurt me”. The promo also shows how her efforts lead to a Supreme Court ruling banning official Bible readings in public school, how she founds the American Atheist organization and how she is abducted, telling her that no one will look for her. However, her disappearance is noticed, and investigations are started.

The biopic, starring also Peter Fonda, Rory Cochrane, Sally Kirkland, Josh Lucas, Adam Scott, and others, will have
its world premiere at South by Southwest Film Festival on March 14, and will launch on the streaming service on March 24.