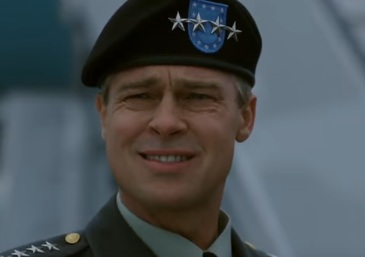 He is the male lead in Allied and he is the male lead also in War Machine, which is a satire of America’s war with Afghanistan with a focus on the people running the campaign. It is Brad Pitt, who plays the role of General Glenn McMahon.

The teaser trailer released by the streaming service features Pitt as a silver-haired general being ironic with a co-worker, telling him to finish his call because the work can wait. In another scene, a woman reproaches him that he, as the leader of U.S. forces in Afghanistan, has spoken to the president only once in 70 days. He is also told by a woman in a crowd that he leads a war he will never win. Another scene in the trailer shows a soldier confessing that he can’t tell the difference between the people and the enemy because they all look alike to him.

War Machine is scheduled to premiere on Netflix on May 26.