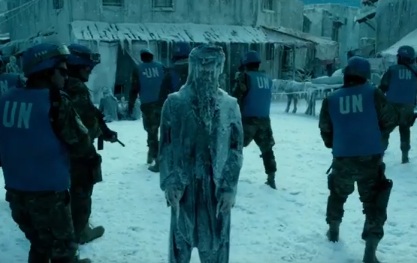 The film, co-written and directed by Dean Devlin, follows Jake, a satellite designer heading into space to prevent
climate-controlling satellites from creating a storm of epic proportions that could destroy the whole world. In the
meantime, on the Earth an assassination plot aiming at the president of the US unfolds.

The trailer reveals that, in the future, the technology that controls the weather controls the world, and features
deadly twisters, giant waves washing out a beach, a snowstorm, skyscrappers falling down in fire and birds and a plane falling from the sky.

Viewers can also get a glimpse of Gerard Butler watching, together with a team of specialists, a screen with alarming information, of the Australian actress Abbie Cornish, who plays US Secret Service Agent Sarah, and is in a car with Andi Garcia, when a storm causes a pole to fall down and destroy a passage, and of Jim Sturgess having a really worried look.

The song used in the trailer is a cover of the hit single “What a Wonderful World”, first recorded by Louis Armstrong and released in 1967.