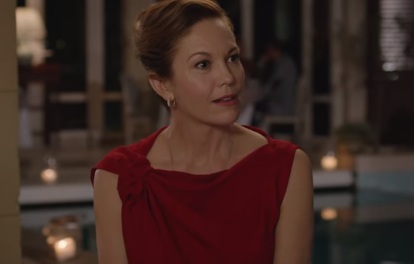 Diane Lane embarks on a journey of discovery involving fine food and wine in the upcoming comedy drama film Paris Can Wait.

The film, marking the screenwriting and directorial debut of Elenor Coppola, at the age of 81, follows Anne, the wife of a Hollywood producer (played by Alec Baldwin), who takes a car trip from Cannes to Paris with a French business associate of her husband, Jacque (played by Arnaud Viard). The drive, which should be a seven-hour ride, turns into a trip lasting days. On the way, she discovers, beside beautiful landscapes and places, fine foods and amazing wines, also her sense of self and joy of living.

The trailer reveals quite much of the plot summary, featuring Diane Lane’s character, Anne, who suffers because of her husband’s attitude towards her, as she joins her husband’s associate on his way to Paris by car. “So, let’s pretend we don’t know where we are going or even who we are”, suggests the latter, Jacques, before hitting the road, making Anne utter a forced laugh and exclaim “Oh, brother”. Their trip proves to be a pleasant experience, which Anne doesn’t want to end, eventually. After enjoying French delicious meals and wines in all kind of restaurants, some of the cosy, some of them fancy, and even outdoor, at picnique, and spending memorable moments in Jacques’s company, who is a charming man and treats her like a queen, she discovers that life can be amazing.

The film, whose soundtrack music is by Laura Karpman, was screened in the Special Presentations section at the 2016 Toronto International Film Festival and is set to be released on May 12.