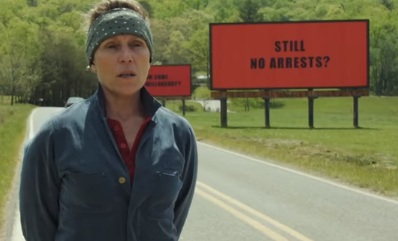 The red band trailer for the upcoming dark comedy written and directed by Martin McDonagh, Three Billboards Outside Ebbing, Missouri, has been released.

Academy Award winner Frances McDormand plays Mildred Hayes, a grieving mom who, seven months after her daughter’s murder case, still not closed, takes action against the the town’s chief of police, William Willoughby (played by Woody Harrelson). She paints three signs alongside the road leading into her small town of Ebbing with a controversial message, which gets media attention and not only. “It seems to me the police department is too busy torturing black folks to solve actual crimes.” says McDormand’s character to a TV reporter at the beginning of the trailer. Soon, Willoughby’s second-in-command, Officer Dixon, gets involved, and the battle between Mildred and the local police escalates.

The songs used in the trailer are “Sleeping on the Blacktop” by Canadian musician Colter Wall, from his 2016 album
“Comancheria”, and the version of the American vocal quartet The Four Top of “Walk Away Renée”, a song made popular by the band The Left Banke in 1966.