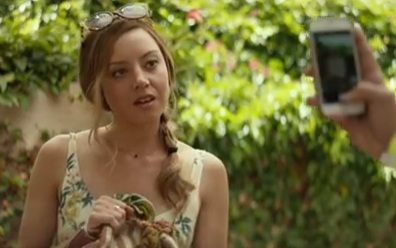 A first teaser trailer for the upcoming comedy drama Ingrid Goes West, due out this summer, has been released.

Directed by Matt Spicer, who served also as a co-writer alongside David Branson Smith, the film follows Ingrid (Aubrey Plaza), a mentally disturbed young woman who moves to Venice Beach, California, to befriend social media celebrity Taylor Sloane (Elizabeth Olsen), whom she became obsessed with after having followed her on Instagram.

The red-band trailer starts with Ingrid showing up at Taylor’s “perfect” wedding and ruining it by spraying something into her eyes because she hadn’t been invited. Other scenes, involving partying, intimate relationships, drugs consumption, a lot of money, violence, a gun, and even a seemingly car accident are shown, as well, without giving away too much, though.

The film, starring also Wyatt Russell, Billy Magnussen, and O’Shea Jackson Jr., was scooped up at this year’s Sundance Film Festival by Neon, that will distribute it starting August 4.

The song used in the trailer is the single “Dumb” by electro-pop duo KOPPS, that hails from Rochester, NY.