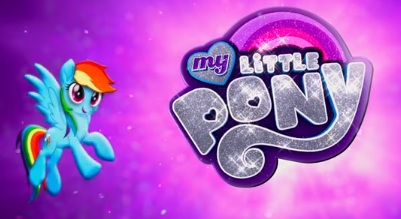 My Little Pony: The Movie

A teaser trailer for the animated film My Little Pony: The Movie has been released.

“This October, the world’s coolest little ponies are coming to the big screen.” – is the message conveyed in the short promo, announcing that the film will feature an original song performed by Sia.

Based on the television series My Little Pony: Friendship Is Magic, the animated musical fantasy film is written and directed by Jayson Thiessen and Meghan McCarth, and follows the “Mane 6”, consisting in princess alicorn Twilight Sparkle, apple farmer pony Applejack, adventurous pegasus Rainbow Dash, party-obsessed pony Pinkie Pie, animal-loving pegasus Fluttershy and fashion designer unicorn Rarity as they leave their home kingdom of Equestria and embark on a mission to stop a threat to the town of Ponyville.

The release in the US theaters is slated for October 6.