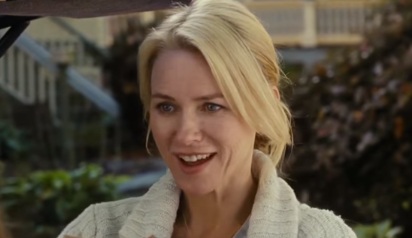 Naomi Watts – The Book of Henry

Naomi Watts is a single mother who raises a child genius in the upcoming drama film The Book of Henry, set to be released this summer.

Directed by Colin Trevorrow, the film follows Susan (Watts) and her exceptionally gifted 11-year-old son, Henry (played by Jaeden Lieberher), and his younger brother, Peter (played by Jacob Tremblay), as they try to put into practice Henry’s plan, written down in a book, to stop their neighbour from harming his stepdaughter, Christina (played by Maddie Ziegler), whom Henry has a crush on.

The trailer starts with Lieberher’s character, Henry, giving a speech in front of his classroom about “our legacy”, which “isn’t how many commas we have in our bank account; it’s who we’re looking up to have in our lives and what we can lead them with.”, and with his teacher asking him to remind her why he can’t be put on a gifted school.

“Because it’s better for my psycho-social development for me to interact with the peer group at a normal school environment.”, answers Henry, who reveals to be his mom’s trusty standby. “Find me another male of the species who’s more grown-up than him”, says Susan to her friend, referring to Henry, and the answer she gets is “I’d like to!”. The trailer gets soon intense as we are introduced to Henry’s world, who writes “this story” about him, his brother, his mother, and the girl who lived next door. “When someone hurts someone else, we have to make it better.”, is Henry’s principle that motivates him to hatch a very detailed plan to stop Christina’s father from abusing her.

We can see how the three family members set out to do justice on their own, after their request to authorities is not followed through, document everything and how they put into motion a mechanism, including domino pieces, that aims at ending the story.

“We have to make it better” – is the final line in the trailer, which features the song “Thousand Eyes” by Icelandic band Of Monsters and Men, from their 2015 album “Beneath the Skin”.