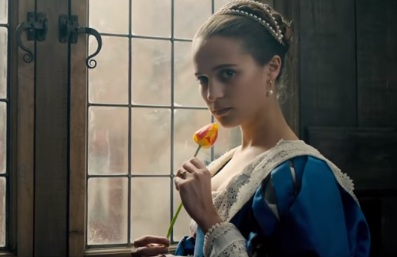 The historical drama Tulip Fever, directed by Justin Chadwick and starring Alicia Vikander and Dane DeHaan, has got a new trailer, announcing that the film is “coming soon”.

Based on Deborah Moggach’s novel of the same name and adapted by Sir Tom Stoppard, the film is set in 1634 Amsterdam, during the Tulip mania of the 17th century, and follows Sophia, a young beautiful orphan forcibly married to a rich and powerful man, as she struggles to escape from his ever-reaching grasp after falling in love with the painter hired by her husband to paint a portrait of them.

The trailer reveals quite much of the plot, giving viewers information about the time when the action takes place
and a glimpse into the passionate love affair between Vikander and DeHaan’s characters, and their quest to get freedom which depends on their luck on the tulip market.

Tulip Fever was originally scheduled to be released on July 15, 2016, but was delayed until February 24, this year, and afterwards pulled from the schedule and moved to August 25, 2017.