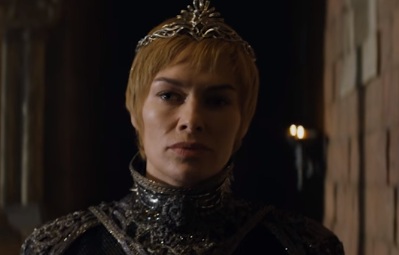 After the teaser trailer for the seventh season of Game of Thrones, announcing the premiere date, an official promo has been released for the hit fantasy drama series.

If in the “Sigils” official tease we didn’t get to see any actor, but only hear them among grating, rumbling and roaring, this time is different. The newly launched video, titled “Long Walk” and starting with the sound of rhythmic drumming, features Jon Snow (played by Kit Harington), Daenerys Targaryen (played by Emilia Clarke), and Cersei Lannister (played by Lena Headey) walking through corridors until they arrive at their thrones, where they sit and close their eyes (which apparently puts out burning candles). Jon Snow returns to Winterfell, Daenerys sits in a new jagged stone seat, and Cersei sits on Iron Throne in the Red Keep.

As the promo ends, we see the latter exhaling and, with wind howling in the background, the blue eye of the Night King.

Game of Thrones is set to return to HBO with its seventh season on July 16.

The song used in the trailer is a dramatic rendition of the 1989 single “Sit Down” by English rock band James.

Tags: got season 7got trailer song