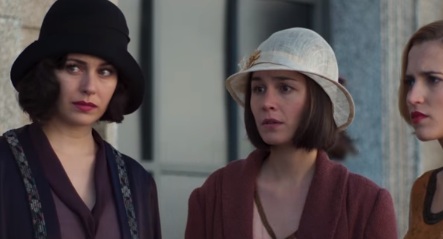 Netflix has released the trailer for its first original Spanish series, Cable Girls, about four women in search of independence in the 1920s Madrid, while working as telephone operators.

“In 1928, there were two billion people in the world, all with their own hopes, their dreams, and their problems” – says a female voiceover at the beginning of the trailer, set to the rhythms of the track “Closer” by Lemaitre feat. Jennie A. “Life wasn’t easy for anyone… but even less so for a woman”, continues the voiceover, who proves to be one of the protagonists, revealing that “we weren’t free, but we dreamed of freedom”.

Scenes featuring the challenges they have to face and the way they face them are shown, as well. Thus, we see one of them confronting her abusing husband and telling him that he can iron a shirt himself when he tells her that the shirt hasn’t been ironed, another one confronting the man who asks her to take her things and go with him, and another one giving a chance to the man who loved her in his teenage years and hasn’t forgotten about her, even though ten years have passed by since then.

The voiceover also says that many of the women living in those times were ready to fight for their freedom.

Cable Girls is set to launch on the streaming service on April 28.