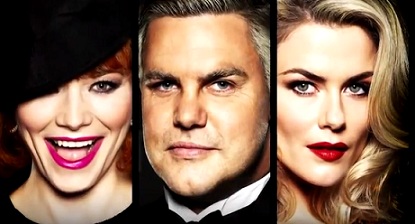 Nine Network 2017 Series: House of Bond (Trailer Song) The trailer for the Australian mini-series House of Bond, about the life of controversial business tycoon Alan Bond, has been released, announcing that it will air on Channel Nine on April 24 and on April 25, at 9pm.

Written by Sarah Smith and directed by Mark Joffe, the mini-series tells the story of Bond from the 1960s to the 1990s, as he became the richest man in Australia and how his empire collapsed, leaving him as the country’s greatest villain. It is a story about dreaming big, ambition, but also about greed, ego and excesses, illustrated by a cast including Ben Mingay in the leading role, Adrienne Pickering, Rachael Taylor, Sam Neill, Samantha Jade, and others. “What you don’t realize: you don’t need money, money needs you”, says Mingay’s character at the beginning of the 60-second promo, featuring the rise and the fall of the business tycoon.

Bond introduces himself by listing his possessions: “My name is Alan Bond. I own three private jets, four yacht, and houses all around the world.” and mentioning that in the 1980s he was one of the most famous people on the planet.” The clip reveals how Bond’s affair with a blonde woman that he hired as an air hostess in one of his jets ruined his marriage. The song used in the trailer is “Good Thing” by British band Fine Young Cannibals, from their 1988 album “The Raw & the Cooked”.