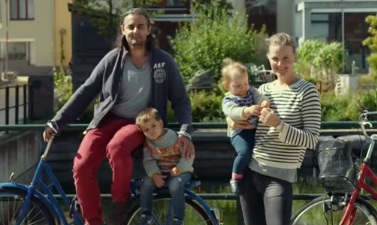 Organised in five chapters (agriculture, energy, economy, democracy, and education), the documentary features concrete examples of solutions to environmental and social challenges of the twenty-first century that have proven themselves in ten countries around the world.

The trailer, set to the ryhthms of “Tomorrow”, a song composed and performed by Fredrika Stahl specially for this documentary, starts with a news presenter announcing that “climate change, destruction of the Earth surface, and population growth are leading us to a tipping point”, and continues with the question raised by two persons willing to change something, respectively “How could we tell people about what we heard when they’re already fed up with catastrophes? And how could we tell millions of people?”. “We had to do something!”, says the woman, talking about her initiative: “So we traveled around the globe looking for the men and women who are offering creative alternatives”. “We didn’t start with Shall We Save The Planet, we just start with where we are” – is another statement revealed in the trailer, which ends with the idea that “there are solutions and if we give everything we’ve got, if we all join our forces and our hearts, we can all start to change the world… tomorrow”.

Tomorrow, which won the French Oscar for Best Documentary, will be released starting with New York and Los Angeles on April 21, to coincide with Earth Day celebrations.