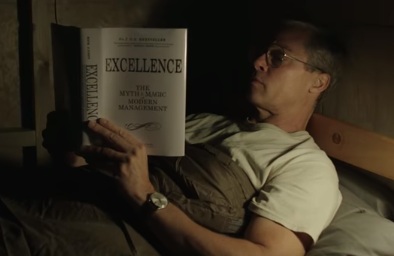 “It takes a leader to win a war.” – this is the message conveyed in the latest trailer for the upcoming Netflix original film War Machine, starring Brad Pitt.

Based on the book “The Operators: The Wild & Terrifying Inside Story of America’s War in Afghanistan” by the Michael Hastings, the film, written and directed by David Michôdm, revolves around a successful four-star general, portrayed by Pitt, who commands NATO forces in Afghanistan with the attitude of a rock star and is taken down by his vainglory and a journalist’s no-holds-barred expose.

The new trailer released by the streaming service, focusing on the comic situations, features Pitt telling to his superior during a video-call that he’s just trying to “work this thing out”, highlighting that the president gave him a job to do. When the man he’s talking to urges him to stop asking for more troops, Pitt’s character invents a technical issue to end the discussion. In other scenes, he shares words of wisdom, saying that “nothing about war is easy” and “we cannot help them and kill them at the same time, it just ain’t humanly possible”, referring to Afghans. During an encounter with Afghans, when one of them asks “Do you think American call us motherfuckers all day?”, mentioning that this is considered, in their culture, “a very bad thing to fuck your own mother”, Pitt answers “in ours, too”.

The song used in the trailer is the 1977 single “Ça plane pour moi” by Plastic Bertrand.