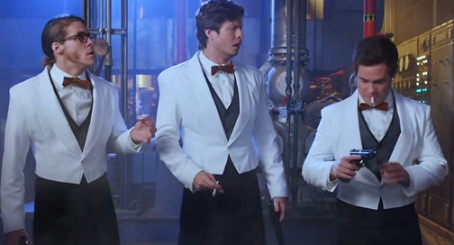 Netflix has dropped a first teaser for its upcoming original action comedy film Game Over, Man!, announcing that it will be released on April 20, 2018.

The 40-second clip, set to the 2015 single “New Level” by American rapper A$AP Ferg feat. Future, from his second studio album, “Always Strive and Prosper”, features protagonists of Comedy Central series Workaholics Blake Anderson, Anders Holm, and Adam Devine, dressed in waiter’s outfits lighting joints with lighters looking like guns. Well, actually, only the first two do this. Devine’s lighter proves to be a real gun, that fires a shot when the trigger is pulled. “Oh, shit, ok, this is a real gun. Ok, that is my bad!”, says Devine’s character, adding “And now we know. So, safety first”.

However, he manages to fire another shot, this time toward the ground, which makes him decide to put the gun down. When he’s summoned to hand over the joint, he changes his mind and points to gun to his fellows.

According to the streaming service, Game Over, Man!, written by Anders Holm and directed by Kyle Newacheck, follows three friends who are on the verge of getting their video game financed when their benefactor is taken hostage by terrorist.