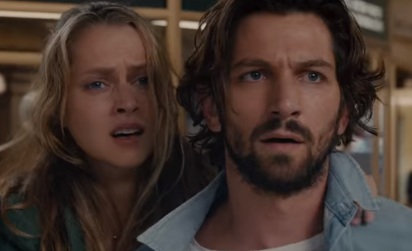 The trailer for the upcoming sci-fi thriller 2:22, starring Michiel Huisman and Teresa Palmer, has been dropped.

Written by Nathan Parker and Todd Stein and directed by Paul Currie, the film revolves around Dylan, an air traffic controller in New York City, whose life is derailed when he realizes a patterns of events repeats itself in exactly the same manner every single day, ending at 2:22pm. When he falls for Sarah, a woman who’s been in the jaws of death when the plane she was on almost collided with another plane because of him, he is determined to solve the mystery of 2:22, as the strange events occurring threaten her life and their love.

The trailer, released with the message “A chance encounter, a fateful connection. Their life, their love are written in the stars”, features how the love story between Dylan (Huisman) and Sarah (Palmer) evolves and how he tries to stop this pattern, which he starts to analyze thoroughly, in order to avoid the death of many people.

The film, starring also Sam Reid, Simone Kessell, Kerry Armstrong, Maeve Dermody, Richard Davies, Mitchell
Butel, and others, is set to be released in theaters, on demand, on Amazon Video and iTunes this summer, on June 30.