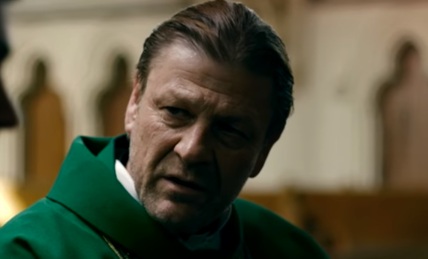 BBC One has released the trailer for the upcoming drama series Broken, by acclaimed writer Jimmy McGovern.

The new TV show, directed by Ashley Pearce and Noreen Kershaw, revolves around Father Michael Kerrigan (Sean Bean), a Catholic priest presiding over a Northern urban parish, who serves as a confidante, counselor and confessor to a congregation struggling to reconcile its beliefs with the challenges of daily life in contemporary Britain. The cast ensemble includes also Anna Friel, who plays Christina, a woman living with her three kids and her mom, who’s pushed by the lack of money to the very edge, Paula Malcolmson, who plays Roz, who’s struggling with a gambling addiction, Adrian Dunbar, who plays Father Peter Flaherty, Father Michael’s confidante and confessor, and Mark Stanley, who plays Andrew, a family man and a demeanor working with the community of St. Nick’s, who finds himself torn between his morals and his career.

Broken, consisting of six 60″-long episodes, will be distributed globally by BBC Worldwide.

The song used in the trailer is Hozier’s 2014 single “Arsonist’s Lullabye”, that has been heard also on AMC’s hit series The Walking Dead.