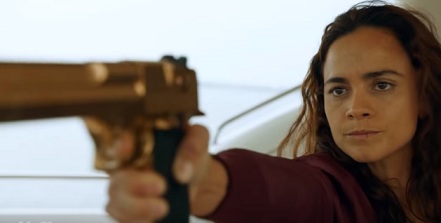 Queen of the South returns to USA Network, June 8, with its second season.

The popular drama series based on Arthuro Pérez-Reverte’s best-selling novel “La Reina Del Sur” revolves around
Teresa Mendoza, a Mexican woman forced to seek refuge in America after her drug-dealing husband is killed. In the process, she teams up with someone from her past to survive and take down the leader of the trafficking ring that’s after her. She also learns the tools of the trade and becomes eventually the queen of a drug empire.

The trailer, released with the message “This summer, there can only be one queen”, features, among others, a conversation between Teresa and Dona Camila Vargas, the head of the American chapter of the Vargas Cartel in Dallas, Texas, in which the latter asks “What do you want from me?” and receives a proposition: “to be part of the business”. “Would you die for me?”, asks Vargas and Teresa answers “I’ll survive for you”.

Vargas also reminds Teresa to not forget whose house she’s in and who built it and Teresa says loud and clear that she will fight or die, but she’ll not run anymore.

The song used in the trailer is “We’re Gonna Rise Up” by Emanuel Vo Williams & Robin Loxley.