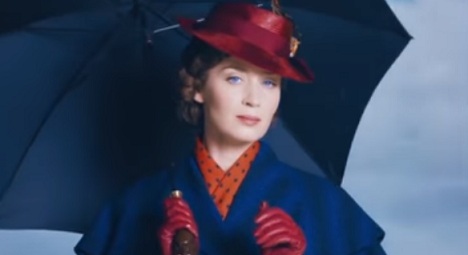 Directed by Rob Marshall, the film, which is the sequel to the 1964 film Mary Poppins, is set 25 years after the 1964 film, in Depression-era London, and sees grown Jane and Michael Banks (the siblings that Mary Poppins took care of as a nanny), along with Michael’s three children (Annabel, Georgie, and John), being visited by the enigmatic Mary Poppins, after a family tragedy. She helps them, with her unique magical skills and with the help of her friend Jack, rediscover the joy and wonder missing in their lives.

In a motion poster revealed by Walt Disney Studios, Emily Blunt shows her face from behind a blue umbrella, and, in another footage, she’s shown being ready to jump, together with Michael Banks (Ben Whishaw) and his three kids, from a rooftop.