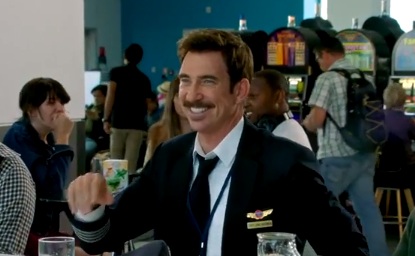 From the co-creator of Modern Family and the guys behind Anchorman, comes the all-new FOX comedy series LA to Vegas, about an airline crew and the passengers who fly from Los Angeles to Las Vegas every weekend hoping they will come back a winner.

The upcoming TV show, that will premiere this January as a midseason entry in the 2017–18 television season, revolves around the crew members of Jackpot Airlines and the way they are dealing with the challenges they face.

Ronnie (Kim Matula) is a flight-attendant who thought this job would offer her the possibility to travel the world and meet interesting people and, instead, is “stuck” on this route. Captain Dave (Emmy Award nominee and Golden Globe winner Dylan McDermott) is a narcissistic pilot who dreamed of becoming a fighter-pilot, actually, and now is trying to have fun with his passengers, which implies that he’s interacting with them as much as possible, and Bernard (Nathan Lee Graham) is the always-positive career flight attendant who thinks there’s no flight more magical than the LA-to-Vegas. There are also some regular passengers in the spotlight, such as Colin (Ed Weeks), an economics professor whose son and soon-to-be ex-wife live in Vegas and forms a “location-ship” with Ronnie, Nicole (Olivia Macklin), a part-time stripper who’s a lot savvier than people realize, and Artem (Peter Stormare), the genial professional gambler who serves as the plane’s resident (but unofficial) bookie.

“We’re gonna put a sock on the cockpit door.” – Ronnie tells Captain Dave in one of the scenes revealed in the promo titled “The Cabin Is Ready & The Doors Are Closed”. “Please, don’t cockpit block me.” – asks Captain Dave, who’s in the company of a curvy young lady. “Can’t I have some fun with my passengers?” – he asks, in another scene, Ronnie, who’s reminding him he is there to fly the plane and asks him instead to “go do that”.

The song used in the promo is the 2016 single “HandClap” by American indie pop band Fitz and The Tantrums, from their self-titled album, released in 2016.