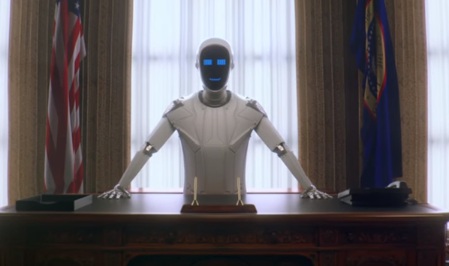 Chanel 4 has launched the trailer for Rise of the Robot Season, which starts on Sunday, November 26, at 9pm, with Guy Martin vs the Robot Car.

In the first episode of the documentary series, the motorcycle racer investigates autonomous vehicles, attempts to build a robotic Ford Transit, and goes head to head with the artificially intelligent prototype Roboracer, in a no-holds barred race around Silverstone, in order to find out what’s fastest, man or machine. The series will also include episodes about the inventors who are about to make sex robots a reality and their clients, about a dancer who looks at how robots are already co-existing with humans and produces exhilarating new piece of hybrid robotic dance, about the inventors trying to make a robot that people like and trust and also about a future world where intelligent robots offer advice to people’s personal problems.

The song playing in the trailer is “Anything You Can Do, I Can Do Better” by Bing Crosby & Andrew Sisters, which was composed by Irving Berlin for the 1946 Broadway musical “Annie Get Your Gun”.