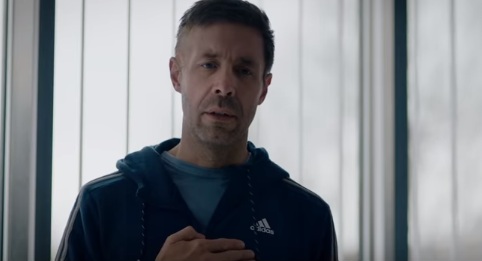 The trailer for the upcoming drama film Journeyman, from writer-director Paddy Considine, has been released.

The film tells the story of how a serious head injury suffered by middleweight boxing champion Matty Burton during a fight affects his marriage, his family, and his life. The boxer, husband of Emma and father of a baby girl, named Mia, finds himself at the beginning of a journey towards regaining his speech, movement and memory, which proves to be the toughest fight he’ll ever face.

The trailer features Burton collapsing at home after winning a punishing title defense on points and struggling to recover, with the help of his wife, whose suffering is also close to agony.

The song playing in the background is the 2015 single “Oceans” by UK duo SeaFret (consisting of Jack Sedman and Harry Draper), whose music video features Game of Thrones star Maisie Williams, from their second EP titled “Oceans”.

The film, described as “a powerful and beautiful story about loss and, ultimately, triumph” and “about our identity, and how in life we sometimes have to dig deep into our soul to discover who we really are”, is scheduled to be released in the UK cinemas on February 16, 2018.