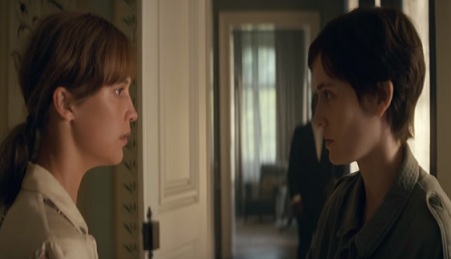 The first international trailer for the Swedish film Euphoria, starring Alicia Vikander and Eva Green, has been finally released, after the teaser dropped last month.

Written and directed by Lisa Langseth, the film sees the two actresses playing estranged sisters Ines and Emilie, who travel through Europe to a country manor house, where one of them wants to end her life. The cast also includes Oscar-nominated Charlotte Rampling, Charles Dance, Mark Stanley, and Adrian Lester.

The trailer reveals that Vikander’s character, Ines, was not aware of her sister’s intention of putting an end to her life, once arrived at the mysterious mansion, where Emilie is informed that her “leaving” would take place in six days from that moment. “What are you doing with these people?” – Ines (Alicia) is seen asking Charlotte Rampling’s character, who seems to be some sort of manager. “We’re helping them. This is a free zone.” – comes the answer. When Ines tells Emilie that she thinks they should get out of there, Emilie warns her that she will still do it.

The song used in the trailer is “Mountains Crave” by Anna von Hausswolff.

The film had its world premiere in the Platform section of the Toronto International Film Festival and is scheduled to be released in Sweden on February 2, 2018.