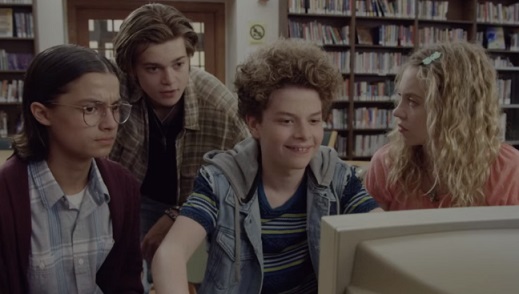 After the date announcement trailer dropped three weeks ago, the official trailer for the upcoming Netflix series Everything Sucks! has been released.

Created by Ben York Jones and Michael Mohan, the show is set in 1996 in a town called Boring and follows a group of high school misfits in the AV and drama clubs as they brave the ups and downs of teenage life in the VHS era, according to the official synopsis provided by the streaming service.

The trailer reveals that, besides the tribulations of the teenage protagonists, the relationship between the high school principal and a student’s mom, both single parents, takes center stage. And things are not that easy since the principal’s daughter becomes the love interest of the woman’s son. The latter finds the courage to ask her out and, judging by the scenes revealed in the trailer, the two will go to prom together.

The song used in the trailer is the 1993 iconic song “Linger” by Irish rock band The Cranberries, included on their debut album, “Everybody Else Is Doing It, So Why Can’t We?”. The single, composed by Dolores O’Riordan (frontwoman) and Noel Hogan and the first song they ever wrote, propelled the band to global fame.

Everything Sucks! launches on Netflix later this month, with all episodes available February 16th.