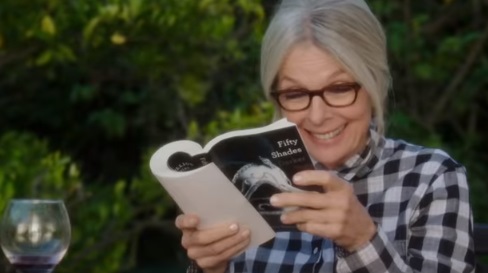 Directed by Bill Holderman, the film revolves around four lifelong friends, Diane (Diane Keaton), recently widowed after 40 years of marriage, Vivian (Jane Fonda), who “enjoys her men with no strings attached” (according to the official synopsis), Sharon (Candice Bergen), who’s still working through a decades-old divorce and Carol (Mary Steenburgen), whose 35-year marriage is in a slump. After reading 50 Shades of Grey in their monthly book club, they are inspired to discover new romances and rekindle old ones, having thus their lives changed forever.

The trailer features the four actresses discovering E.L. James’ book and starting to approach again subjects like men and sex, and being willing to revitalize their intimate life and experience more. Carol (Steenburgen) is seen trying to get kinky with her husband (Craig T. Nelson), who unknowingly takes Viagra after she puts it in his beer, Diane (Keaton) and Sharon (Bergen) are looking for love, one of them via dating websites, and Vivian (Fonda) rekindling an old flame.

The songs used in the trailer are Kelly Clarkson’s “Love So Soft” and Roger Hodson’s “Give A Little Bit”. Book Club hits theaters this spring, on May 18.