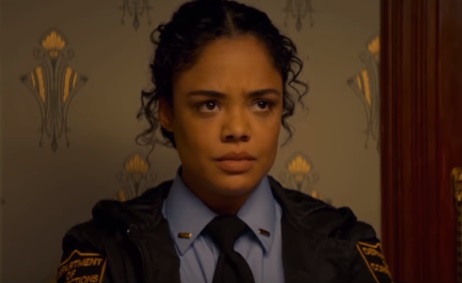 Tessa Thompson is a rookie correction officer who struggles to keep an inmate under control in the upcoming comedy drama Furlough.

The trailer reveals that things spiral out of control during the road trip and that the 36 hours they spend together include a series of hilarious, surprising, and even touching moments, which help the two form an unlikey bond. One of the scenes features Lee’s character getting free of her fetters and trying to run away with a truck driver, to whom she asked for a ride, and that her mother wants to pay her off to not see her own daughter. Encouraged by her correction officer, Lee’s character pays a visit to her daughter, who says “If I could talk to my mother, I’d tell her I didn’t care what she did in the past”.

The song used in the trailer is the 2013 single “With You” by Dan Gautreau & Wolfgang Black, which was also featured in TV shows like Jane the Virgin, Reign, and Downward Dog.

Furlough is opening in theaters and VOD this month, on March 16th, 2018.