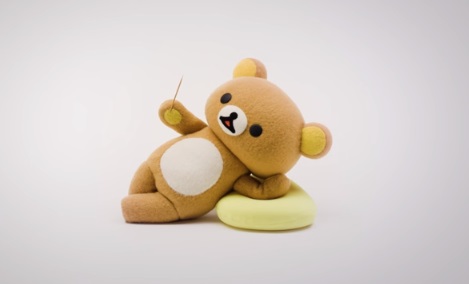 Netflix has released a teaser trailer for its upcoming original series Rilakkuma and Kaoru.

The show, created by Japan’s leading stop motion animation studio dwarf in collaboration with Aki Kondo, revolves around Rilakkuma, a mysterious soft toy bear with a zipper on its back who turns up to live with Kaoru, a seemingly ordinary young woman that also lives with a small white bear cub named Korilakkuma and Kiiroitori, Kaoru’s pet bird.

The original character creator, Aki Kondo, and internationally acclaimed filmmaker Naoko Ogigami teamed up as screenwriters and Masahito Kobayashi joined the team as a director. There will be a total of 13 episodes, set to be released by the streaming service in spring 2019 in more than 190 countries around the world.

The stop motion teaser gives viewers a first look at the cute creatures of the new Netflix show, starting with Rilakkuma, obviously, who likes spending his days just lazing around, but “is impossible to hate.” Korilakkuma and Kiiroitori are also featured, but not also Kaoru.

The soundtrack music is “The Fade” by Daniel Kadawatha.