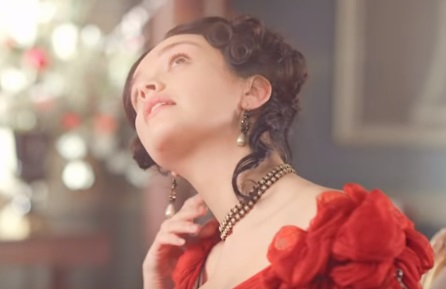 ITV has released a trailer for the adaptation of William Makepeace Thackeray’s 1848 novel Vanity Fair, set to premiere later this year on the channel.

The seven-part series, written by Gwyneth Hughes (the screenwriter behind Dark Angel), revolves around Becky Shart (played by Olivia Cooke), a charming young woman who tries to escape poverty and ascend the heights of English Society. Her mission, which takes her the court of King George IV, is marked by “villainy, crime, merriment, lovemaking, jilting, laughing, cheating, fighting and dancing”, and also by broken hearts and lost fortunes.

The song used in the trailer, which features Olivia Cooke only, lounging in a chair and placing one of her feet on a globe in front of her, is the 2018 single “White Flag” by British musician and singer-songwriter Bishop Briggs (Sarah Grace McLaughlin by her real name), from her official debut album, “Church of Scars”.

An air date for the series has yet to be confirmed by ITV.