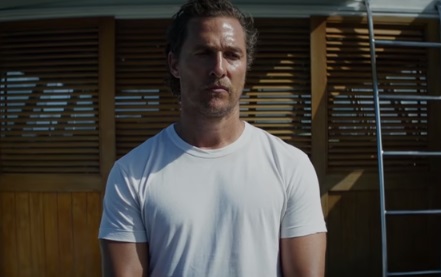 The first official trailer for the upcoming thriller Serenity, starring Matthew McConaughey and Anne Hathaway, has been released.

Written and directed by Steven Knight (the screenwriter behind Peaky Blinders and Taboo and director of Locke), the film revolves around McConaughey’s character, Baker Dill, a fishing boat captain living in the Caribbean and leading tours off a tranquil, tropical enclave called Plymouth Island. According to the official syopsis, “His quiet life is shattered, however, when his ex-wife Karen (Academy Award winner Anne Hathaway) tracks him down with a desperate plea for help. She begs Dill to save her – and their young son – from her new, violent husband (Jason Clarke) by taking him out to sea on a fishing excursion, only to throw him to the sharks and leave him for dead. Karen’s appearance thrusts Dill back into a life he’d tried to forget, and as he struggles between right and wrong, his world is plunged into a new reality that may not be all that it seems”.

The trailer features Hathaway approaching McConaughey and asking him to take her new husband, who’s violent with her, out on the boat and drop him in the ocean for the sharks, but this is only one of the very few things clear in the trailer. The shots included in the trailer are intriguing, with lots of gestures and dialogue that point to something a bit more sinister. “Everybody knows everything. It was like everybody knows something I don’t.” McConaughey is heard saying.

“On this island, the truth lies beneath the surface” onscreen lines read throughout the trailer, which ends with McConaughey saying “Sometimes we do bad things for good reasons”.

Serenity opens in theaters this fall, on October 19th.